Jojoba oil and rosehip oil are two of the most popular oils used in cosmetics. Jojoba oil is a liquid wax that is extracted from the seed of the jojoba plant, while rosehip oil is derived from the seeds of a rosebush. Both oils have a number of benefits for skin, hair, and nails, but there are some key differences between them. In this article, we will compare jojoba oil vs rosehip oil to help you decide which one is best for you.

What Is Jojoba Oil

Jojoba (pronounced ho-HO-ba) oil is a natural oil that’s extracted from the Jojoba plant. The Jojoba plant is a shrub that grows in arid regions and produces seeds that contain Jojoba oil. Jojoba plants are native to North America but the oil is now produced all over the world. Jojoba oil has been used for centuries for its medicinal properties.

Surprisingly, Jojoba Oil isn’t actually an oil – it’s a liquid wax. Although the name is a little misleading, it feels and looks just like an oil, hence the name.

Jojoba oil is very similar to our skin’s natural sebum, so it’s great for any and all skin types.

It is known for its anti-inflammatory properties, and it’s ability to soothe inflammatory skin conditions like dermatitis, psoriasis and eczema. It’s also rich in omega fatty acids, vitamins and minerals.

Jojoba oil is technically not an oil at all, but a wax ester. It feels and looks just like an oil which is why it’s one of the most popular oils in the skincare industry.

Best for: all skin types

How Often To Use: Can be used every day, morning and night

What To Look For: 100% pure, cold-pressed jojoba oil

What Is Rosehip Oil

Rosehip seed oil, often known as Rosehip oil, is extracted from rose bush seeds after the petals have fallen. Wild rose bushes grow in the Andes Mountains and produce the majority of Rosehip Oil, although it may also be found in a few other locations throughout the world.

Rosehip oil is unique in that it’s classified as a “dry oil” which means that it’s lighter and less greasy than other oils. You’ll instantly notice the difference between a dry oil like rosehip oil and non-dry oils. It moisturizes without leaving an oily layer or feel on the skin, which is one of the reasons why Rosehip oil is so popular among people with oily and acne-prone skin.

Rosehip oil is so popular in the skincare industry because it has so many amazing benefits thanks to its high concentration of vitamins, minerals and antioxidants. And it’s a great oil for those who do not like the feel or finish of traditional facial oils.

Rosehip oil is a dry oil, so it has a lightweight, non-greasy texture and feel. It can help to brighten skin, fade hyperpigmentation, reduce signs of aging and even treat acne.

How Often To Use: Can be used every day, morning and night

What To Look For: 100% pure, cold-pressed Rosehip Oil

Both oils have some similarities, but when you look at their composition, they’re actually pretty different and that can make a big difference for your skin.

Now you’re probably wondering what all that even means, but just stick with me here because it’s important and can help you pick out the right oil for your skin.

Linoleic acid (also known as Omega-6) is lighter then Oleic acid and tends to absorb better into the skin. It’s been found that oily and acne-prone skin types often have low levels of linoleic acid in their skin, which means that using an oil with high amounts of Linoleic Acid can be very beneficial.

It’s also been shown that Linoleic acid can have barrier-repairing properties, so using an oil with high levels of this fatty acid can help with those with a damaged barrier.

Oleic acid (also known as Omega-9) is thicker, richer and much more nourishing. This makes it more beneficial for drier skin types. Oleic Acid has also been shown to be a permeability enhancer which means it can help other skincare products absorb better.

So you’ll see that Jojoba oil does not have a high concentration of either of these fatty acids. Instead, it’s rich in Arachidonic acid, also known as eicosanoic acid. This fatty acid has incredible wound healing properties and is known to be one of the most abundant fatty acids naturally found in the skin.

This is good because it means Jojoba oil is more similar to our skin’s own sebum, so there’s a very low chance of any reaction or clogged pores.

Eicosanoic acid is involved in the immune response which triggers the pathways our body uses to promote wound healing and tissue repair.

So what does this all mean? While Jojoba oil is all around a great choice for all skin types, It really shines when it comes to healing and soothing inflammation, so it’s the best option for those with inflammatory skin issues like dermatitis, psoriasis and eczema.

Rosehip oil is a better choice for those with acne-prone or oily skin because of its high linoleic acid content.

Rosehip and jojoba oils are two of the most widely used oils in the cosmetics industry. They’ve been utilized for years to promote wound healing, reduce irritation in inflammatory skin diseases, and moisturize the skin and hair. Here are some similarities between Jojoba Oil and Rosehip oils:

Let’s take a look at which oil is better for certain skin types and skin concerns.

Facials oils in general can be beneficial for acne because they help to regulate sebum production which can prevent acne. Bu when it comes to jojoba oil vs rosehip oil for acne, is one better than the other?

Rosehip oil is a better choice for acne because it has anti-bacterial properties which helps to kill acne causing bacteria. It’s also rich in Vitamin A which promotes skin cell turnover to keep dead skin from clogging pores. Plus, it is high in linoleic acid, which has been proven to help treat and prevent acne.

Although Jojoba oil is also anti-bacterial and anti-inflammatory, Rosehip oil just has so many more properties that make it the best choice for acne.

Rosehip oil is lower on the comdeogenicity scale so there’s a slightly less chance of any issues.

If you have dry skin, Jojoba oil is going to be the better choice. Jojoba oil is a great option for dry skin because it closely resembles our skin’s sebum and can help to moisturize and nourish the skin. And since rosehip oil is a dry oil, it’s not as nourishing as Jojoba oil.

If you have oily skin, Jojoba oil can actually help to balance sebum production and prevent your skin from getting too oily. Jojoba oil is so similar to our skin’s natural sebum that it tricks our skin into thinking it’s producing enough oil, so it doesn’t produce as much.

Both Jojoba oil and Rosehip oil are great choices for oily skin, so you really can’t go wrong with either one.

When it comes to Jojoba oil vs Rosehip oil for wrinkles, they both have their own unique benefits. Jojoba oil can help to smooth out wrinkles because it’s a great emollient. Rosehip oil is a good choice for wrinkles because it’s high in Vitamin A which helps to promote skin cell turnover and stimulate collagen production which plumps and smooths fine lines and wrinkles.

Jojoba oil and Rosehip oil are both great for hair. Neither oil is particularly better for the hair – they’re both great oils that can help to nourish and condition the hair. Jojoba oil is a great choice for those with dry, damaged hair because it can help to repair and protect the hair. Rosehip oil is a good choice for those with thin, fine or oily hair since it’s a dry oil and has a lighter, less heavy texture.

Which One Is Better Rosehip Oil Or Jojoba Oil?

So, which is better Jojoba oil or Rosehip oil? Well, it honestly depends on your skin type and what your skin concerns are.

If you have acne prone skin, rosehip oil is a better choice because it has anti-bacterial properties and is high in linoleic acid.

If you have dry, sensitive or have certain skin conditions like eczema or dermatitis, Jojoba oil is a great choice because it helps to nourish skin and promote wound healing.

Can You Use Jojoba Oil And Rosehip Oil Together?

Yes! Jojoba oil and Rosehip oil actually work great together. Rosehip oil is a great oil to use during the day since it’s lightweight and non-greasy. Jojoba oil is thicker so it can be used at night. The two together make quite the combo!

So, is rosehip oil or jojoba oil better? Jojoba oil and Rosehip oil are both great oils with their own unique benefits. Depending on your skin type and concerns, one might be better than the other. Since Roeship oil is rich in Vitamin A and linoleic acid, it’s a great choice for anti-aging and acne. Jojoba oil is a good choice for dry or sensitive skin since it’s more nourishing and can promote wound healing and tissue repair. 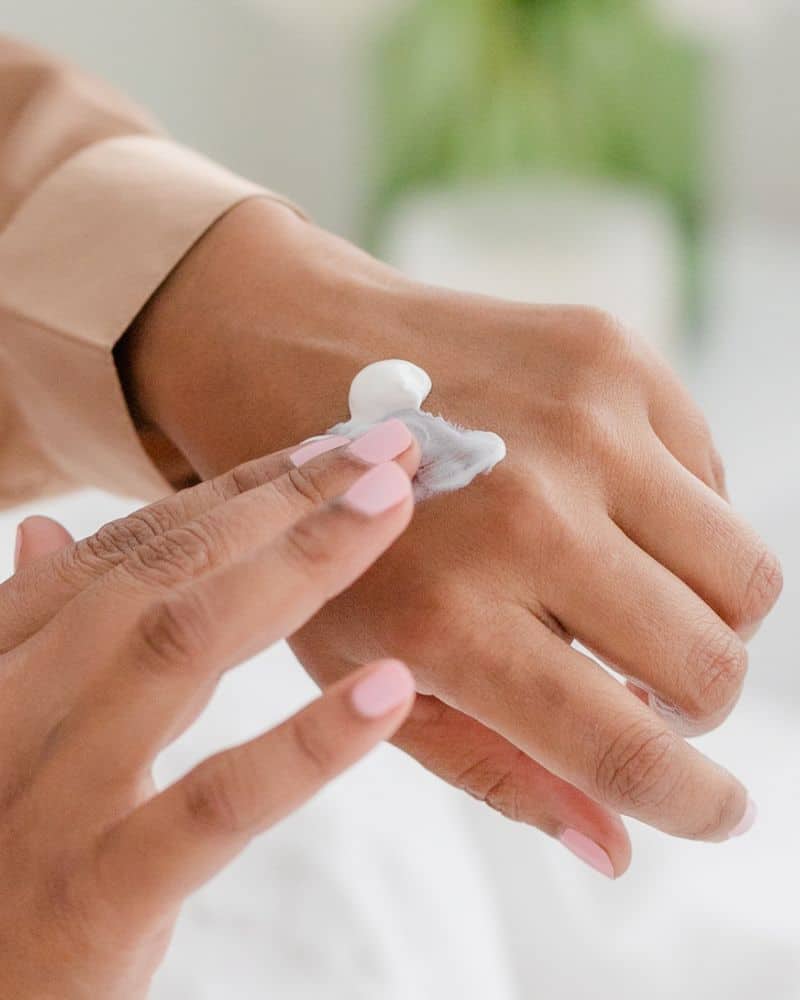 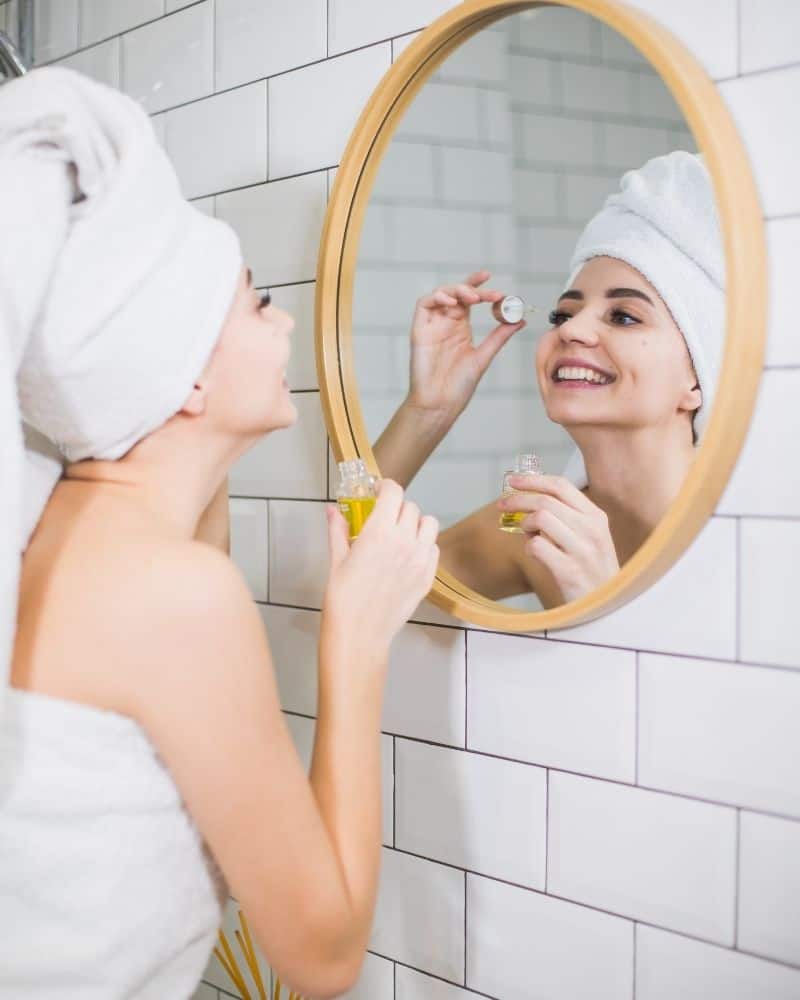 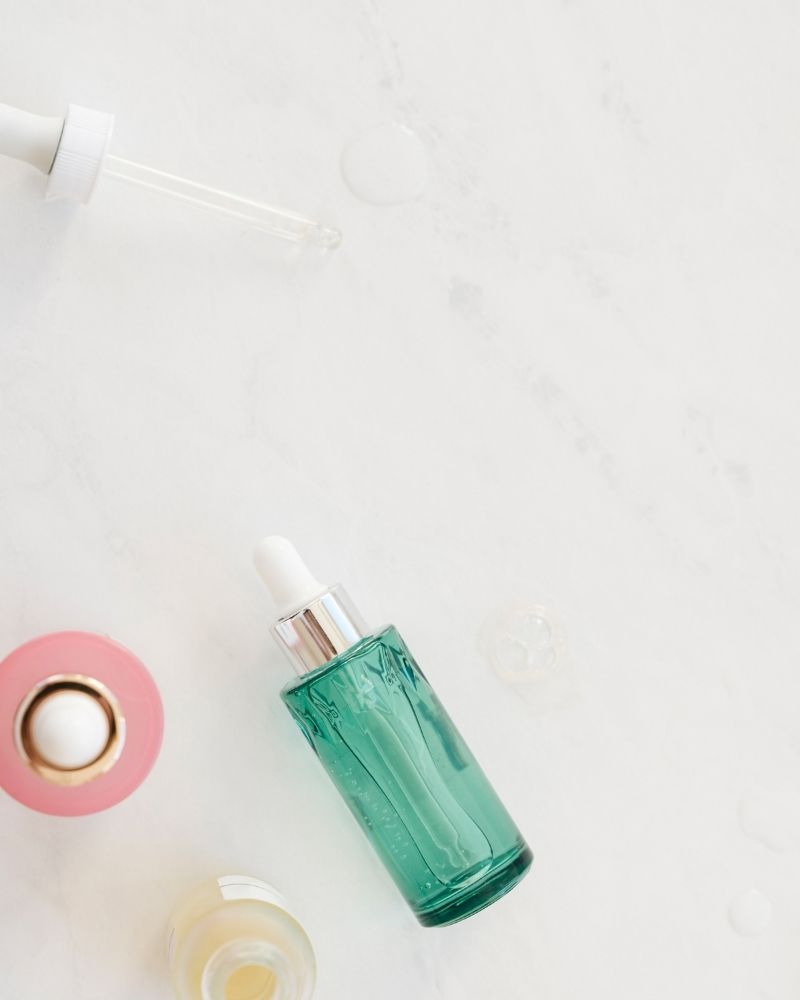 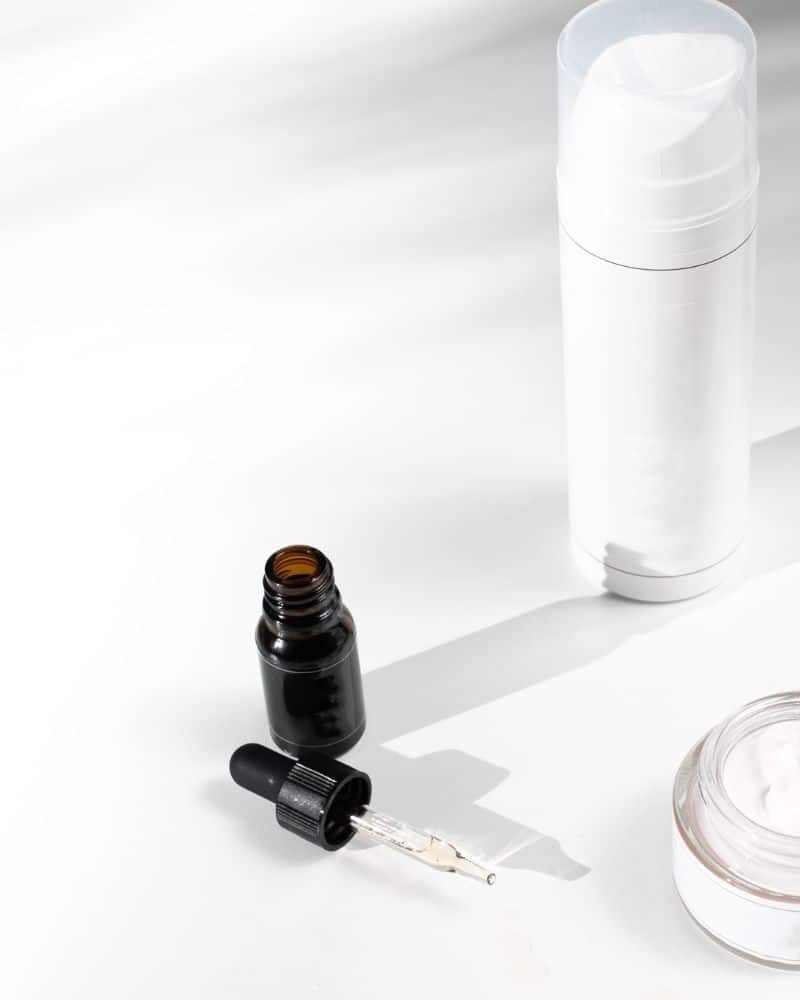 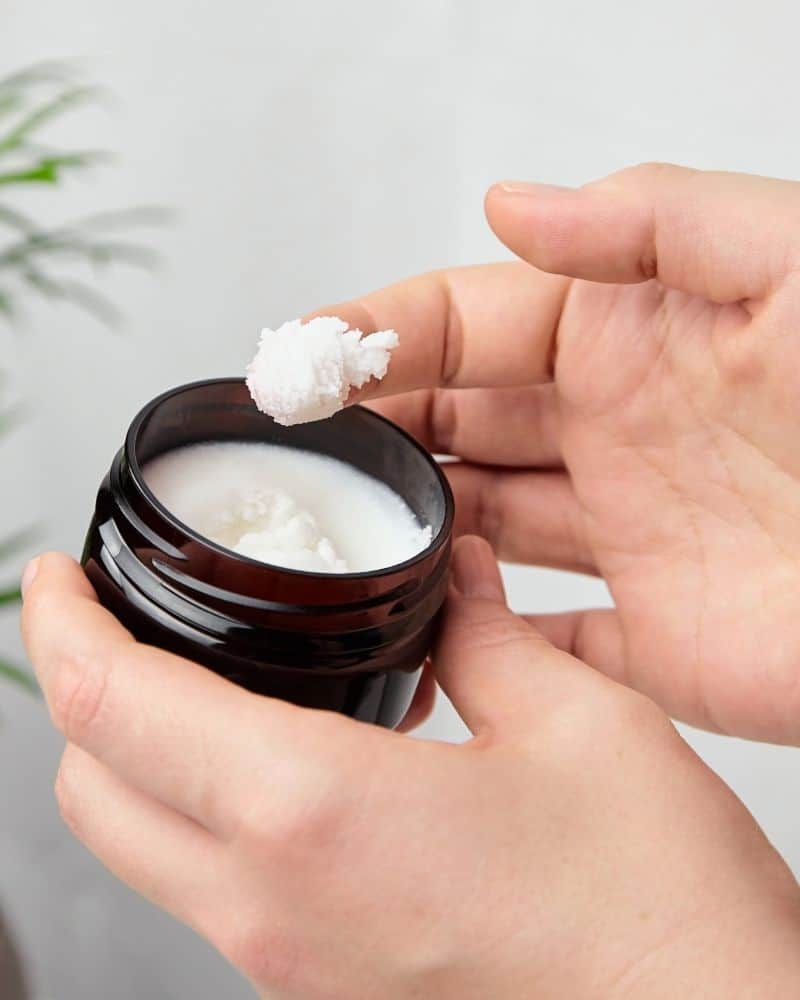 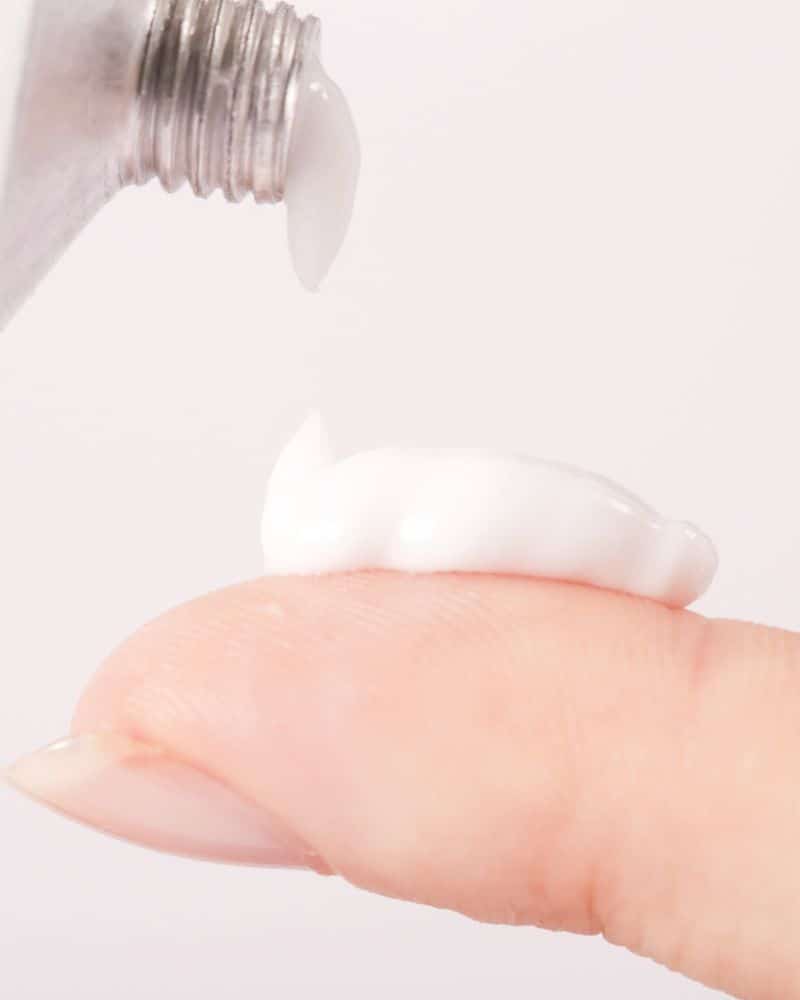